India’s first ‘World Peace Center’ will be established in Gurugram 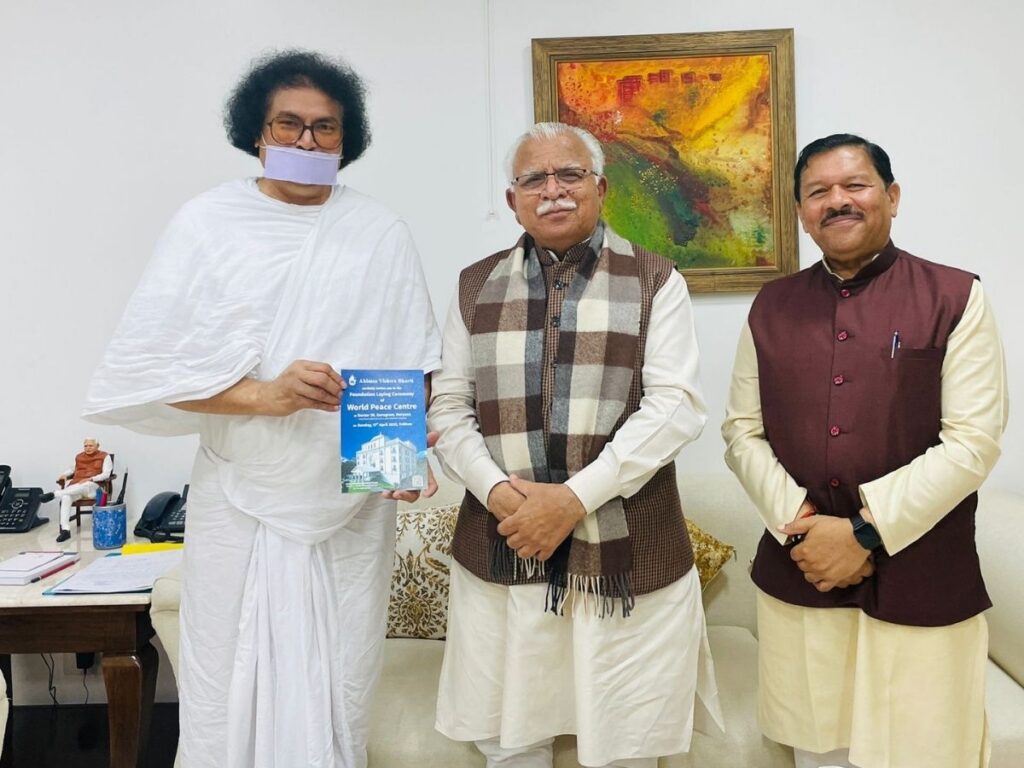 Gurugram (Haryana) [India], March 14: Ahimsa Vishwa Bharti organisation established by Ambassador of Peace, Eminent Jainacharya Dr Lokeshji will establish India’s first World Peace Center in Gurugram, Haryana. For this, the Haryana Government has allotted a plot to the organization in Sector 39 of Gurugram opposite Medanta Hospital and adjacent to Delhi-Jaipur Highway. Acharya Dr Lokeshji, the Founder of Ahimsa Vishwa Bharti, said that the organization would soon start the construction of the World Peace Center (WPC) on this plot.

In Delhi today, Ambassador of Peace Acharya Dr Lokeshji met the Chief Minister of Haryana, Shri Manohar Lal Khattar, and expressed his gratitude towards the Haryana Government and said that ‘World Peace Center’ will work for the establishment of peace and harmony in the world. The voice of this centre of Gurugram will be heard all over the world by its work, including the United Nations and the World Religion Parliament. He said that the programs of Peace Education, prepared with the coordination of ancient knowledge and modern science, would be conducted for everyone such as students, teachers, youth, women, doctors, engineers, lawyers, traders, farmers etc. Acharya Lokesh informed that while the Education Department is working in the field of physical and intellectual development, the World Peace Center will be dedicated to the mental, emotional and character development of the people.

Acharya Lokeshji said that ‘World Peace Center’ will be a major world-class centre for personality building, where various dimensions such as Personality Development of Youth, Empowerment of Women and Sanskar Development in Children through Meditation, Yoga, Indian Culture and Jain lifestyle based scientific programs will also be conducted here.

Acharya Lokeshji said that the Ahimsa Vishwa Bharti had got the plot by depositing the entire amount in the Government treasury, on which the construction work of about 25000 square feet will be completed in two years. He expressed his gratitude to the Hon’ble Chief Minister of Haryana, Mr. Manohar Lal Khattarji.

Senior BJP leader Shyam Jaju, who was present on occasion, said that the allotment of a plot by the Haryana Government to the Ahimsa Vishwa Bharti Organization is an honor for the humanitarian programs of the organization, which has encouraged lakhs of workers spread across the country and the world. He has expressed his gratitude towards the Haryana Government on behalf of the Organisation. On this occasion, Mr. Jaideep Arya, Chairman, Haryana Yoga Commission and newly elected MLA of BJP in Uttar Pradesh Dr. Niraj Bora, were also present.

Riya Sammi: Painting the Canvas of Her Future