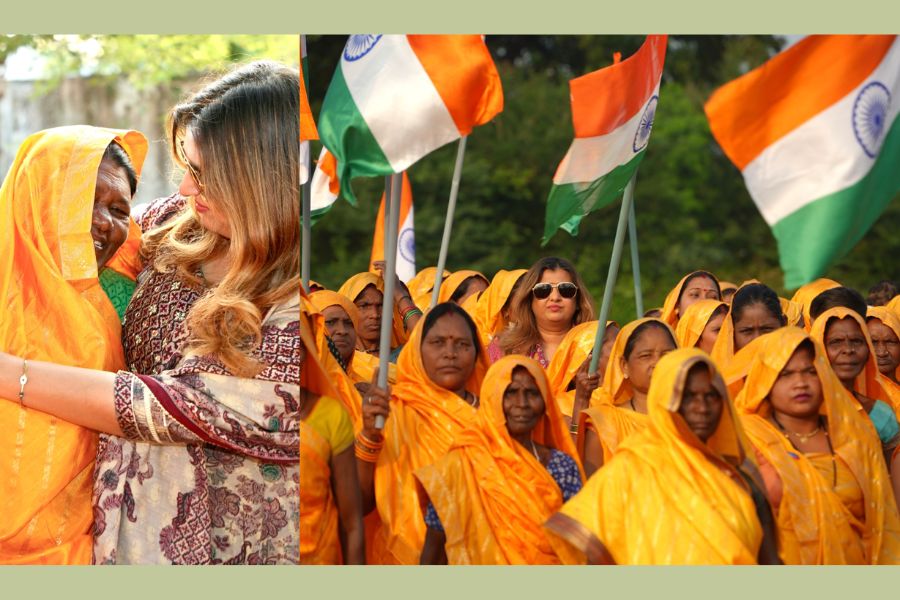 October 21: Women entrepreneur/ philanthropist – Neeti Goel launches project Nari Nitti- which is bringing a revolutionary change in the lives of rural women by giving them the opportunities to earn a livelihood and making them self-sufficient !!!

Her slogan is CREATE, NUTURE, TRANSFORM

Neeti Goel has touched the lives of many during the pandemic, she co-founded an initiative called Khaanachiye- where they started by serving free meals to needy, and homeless people. It started with 1200 meals and today it has reached 80 Lac plus meals and 60 thousand ration kits were distributed to the homeless, they adopted 32 orphanages, and 800 sex workers, and donated 50 thousand sanitary napkins. When cyclone Nisarg hit human lives in Raigadh LB Trust helped people to rebuild their homes and 1000 homes were rebuilt which were destroyed in the cyclone.

She also co-founded the ‘Ghar Bhejo’ campaign with actor Sonu Sood, where they helped 1.5 lacs, migrants reach home. Migrant camps were set up in thane, Dahisar, and Vashi to provide migrants walking home with food, fruits, biscuits water, Ors, and slippers to ease their journey and 5 lac migrants were served through these transit camps. Later they gave ration kits in Varanasi to thousands – Many communities like potters, boatmen, and weavers got served with food and ration kits during the lockdown and during this, they came across a Naxalite village near Mirzapur where girl child was not allowed to attend school as it completely forested area. They were provided with 250 bicycles so they can attend school and educate themselves. She also met rural women who were victims of domestic violence and torture in remote rural villages of Uttar Pradesh. Neeti Goel helped those women and got them trained in self-defense and basic reading and writing creating an army of 25 women in one village so they can stand with each other and protect themselves. Soon the army spread to other villages and grew to thousands. She also created employment for those women by setting up sewing centers for them, giving them carts to sell vegetables, and making Diya, papad, and various other jobs. After working for1800 women in Uttar Pradesh Neeti Goel decided to expand to Gujarat and Madhya Pradesh and Maharashtra. There they started a project called ‘Nari Nitti’ and now are looking to expand it not only to a few states but to the entire nation… This is only possible when people come forward and be a part of this movement Nari Nitti and join the mission of atamnirbhar Bharat!!!

Entrepreneur Neeti Goel says “a woman is a full circle. Within her is the power to Create, nurture and transform.”

“Women don’t need to be empowered, they are already empowered. They have the inbuilt potential to do everything. They just need to be nurtured to create an opportunity which they lack most of the time because in our country we have the taboo where women specially in rural areas are taught from childhood that they are good for only managing homes!!!  But what about those women whose husbands are alcoholics n don’t support their families and their children also suffer as they don’t get an opportunity to study. Nari Nitti was specially incorporated to create opportunities for Women. Now we are focusing on touching 1 lacs women’s lives and if we change 1 woman it helps her entire household. One life can transform 5 lives as a lady is the epicenter of her home.

She further added “In MP there is a lady who has 5 children, the husband was alcoholic and used to beat her and they were facing innumerable trouble hunger, no school and she used to drive a cycle rickshaw to fend for her and her 5 children. One day her rickshaw broke, when she was in extreme depression, someone reached out to us for help so we decided to give her E-Rickshaw. As the cost of 6 lives is much more than an e rickshaw and now they can live a life of dignity. This is a story of hope, never losing courage or giving up on life. We should never lose hope and fight against all odds as we don’t know what god has in store for us at the next step. Under Nari Nitti we have started a new project for women who are below the poverty line in rural areas where there are no job opportunities or industrialization. By donating cows to those needy women, and widows who don’t have any other medium to earn bread and they can at least have 2 meals a day by selling cow’s Milk, cow dung, and ghee…We will be donating 500 cows in the first phase of the project after much scrutiny and a rigorous process of selection so that the right recipients get the benefit of this project.

This revolutionary movement and projects have been possible only because of support of one man Pranay Goel who is the husband of Neeti Goel, and his family trust LB trust has been funding various projects.

Neeti Goel, who hails from Chandigarh and who is the daughter of well-known industrialist Late SK Gupta, is a successful restaurateur based in Mumbai. She runs ”Keiba’, ‘Osstaad’, ‘Madras Diaries’ and ‘Madras Express’ in Mumbai, and the brand ‘Amore Stays’ has premium staycations in Alibaugh. She has been awarded the ‘Restaurateur of The Year in 2019 at the Eiffel Tower in Paris and one of her restaurants was ranked 2nd among the Top 50 restaurants in the world. In 2022 she was honored as one of the top 50 influential Indians at the London Bridge in London. Neeti was recently felicitated at zee Hindustan – Udaan dare  to dream by honorable cabinet minister Ashwini Vaishnaw for her stellar work for women empowerment/child development – project Nari Nitti  .