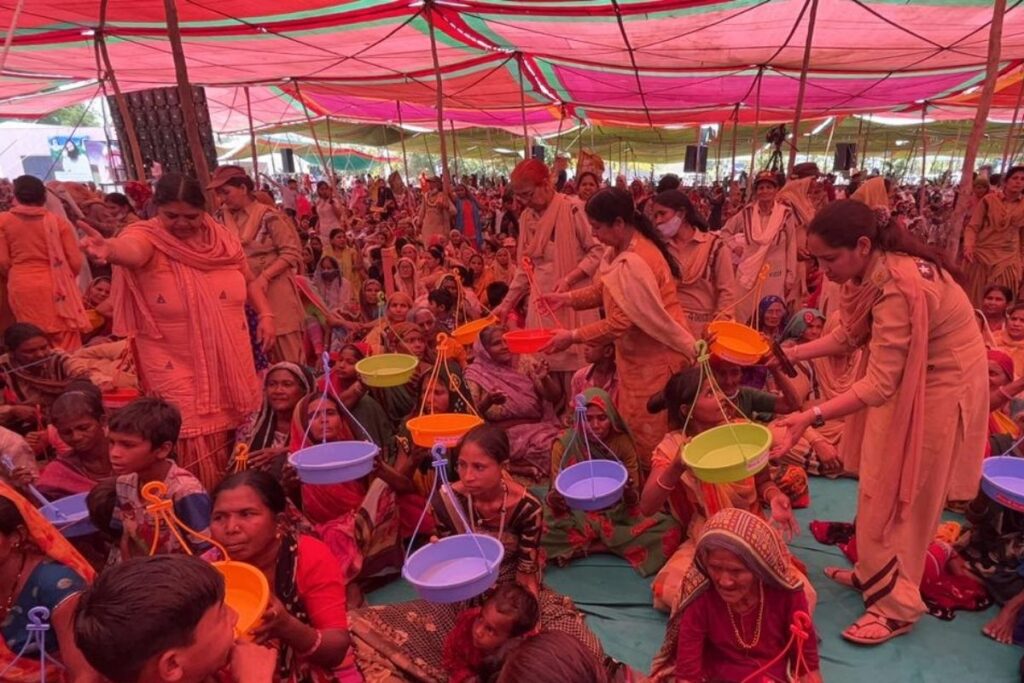 Despite the scorching heat, people arrived in large numbers from different blocks of Gujarat – Ration for one month each was given to 529 very needy families under the food bank program of the 138 humanitarian welfare works taken up by the followers – 529 bird waterers were placed to quench the thirst of birds under rescue-birds campaign – The followers were ecstatic on listening to the words of the Revered Guru ji.

Gandhinagar (Gujarat) [India], April 27: The foundation day of Dera Sacha Sauda was celebrated with reverence and enthusiasm by the dera followers in Gandhia nagar, the capital city of Gujarat, on Sunday. Their numbers at the “Namcharcha”(a gathering to sing medley of devotional songs in praise of the Guru and his teachings) to mark the “Bhandara” held at Sector-22 Rang Manch Ground was so large that even the pandals for the event fell short. During the namcharcha, the Dera followers distributed one month’s ration kits each to 529 very needy families under the ‘Food Bank’ campaign and 529 bird waterer were also placed under the Bird Rescue Campaign, two of the 138 humanitarian welfare activities being carried out world over by the followers on Revered Guru ji’s initiative. The namcharcha began with the slogan “Dhan-Dhan Satguru Tera Hi Aasra” and greetings for all followers on the spiritual foundation day. Following this, Kaviraj, the lead singer of the choir, sang devotional songs from the granth (holy book).

Always walk firmly on the path of welfare of humanity: Revered Guru Ji
During the namcharcha, the followers listened to the recorded words of their guru Sant Dr. Gurmeet Ram Rahim Singh Ji Insan on huge LED screens with reverence. Guru ji said that a man should always remember his quality to achieve something. It is the work of the monsters to kill any organism, not of a human being. Don’t lie, don’t cheat, don’t be dishonest, don’t be corrupt, don’t accept bribes and never criticize or condemn anyone. It written in all our religions, but that is what everyone is engaged in today. The Revered Guru ji said that a man should always walk on the path of truth, if he sincerely worships God, he will witness such divine visons that he never had imagined in his life.

All the arrangements for the event fell short in front of the devotion of the followers
Special arrangements were made for the food and beverages by the local followers for those who had come to attend the gathering of “Bhandara” from outside the city/state. More than a thousand volunteers took over their duties on Saturday itself to ensure smooth functioning of the event. But in the face of the great enthusiasm of the followers, the arrangements seemed to be falling short. As far as one could see, a sea of followers was visible. At the end of the event, all the followers were served “prashad” within a matter of minutes.

Garba and Dandiya of Gujarat were the centre of attraction
Garba and Dandiya, the famous folk dances of Gujarat, became the centre of attraction during the namchara of the Bhandara. The arrival of Dera followers in traditional costumes were a feast to the eyes at the nacharcha. The dera followers expressed their happiness and enthusiasm by performing garba on the beats of traditional instruments. Even at the pandal erected for the namcharcha, the stage and main gate also displayed the local Gujarati culture. The face of the followers, who danced to the music in the namcharcha, reflected reverence and faith in their Guruji.

Dera Sacha Sauda was established on April 29, 1948.
It may be recalled that the Dera Sacha Sauda was founded on 29th April, 1948 by the first Guru Revered Sai Shah Mastana ji Maharaj. The second Guru, Shah Satnam ji Maharaj, performed thousands of satsangs in different parts of the country and led millions of people on the path of humanity by giving them guru mantras (God’s words). Continuing the tradition, the third Guru the Revered Guru Saint Dr. of Gurmeet Ram Rahim Singh Ji Insan, encouraged the devotees of Dera Sacha Sauda to take up 138 humanitarian welfare works. These are for the welfare of the poor, include providing nutritious food to children for their better health, donating sewing machines to needy women to make them financially self-sufficient, getting economically weaker patients treated free of cost when in need, providing tri-cycles to support the disabled, constructing houses for the poor, supporting marriages of girls from poor families, and donating ration to families in need etc. There are numerous other activities that include donating blood, donating body after death, donating eyes after death, donating (one) kidney to people in need for transplant, planting saplings to mark important occasions, that were initiated by Guruji at the dera. In addition, on the 29th of April 2007, the Revered Guru ji initiated the “Spiritual Jaam” to lead the revival of the dying spirit of humanity.